Villabuena is distributed mainly around long and parallel streets , that follow its space beside the river, where you find the Parish church.

One of the highlights of the municipality are the numerous renaissance houses, remarkable mansions and palaces of noble facades of sillar stone, decorated with shields and small escudetes, built between the XVII and the XIX centuries. 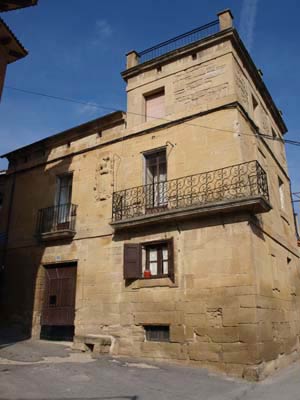 It is the Palace de Peciña de Samaniego, known as the Casa del Indiano. Its author is Andres de Bença, who built it between 1608 and 1610 following the order of Pedro de Peciña Samaniego,Archdeacon and canonigo of Santiago de Compostela. It became home of some of the most important carlist characters born in the town, for example Francisco de Paula Rivas.

It is a building formed by two bodies, a ground floor and a rectangular plot added by a tower higher than the rest, that has the richest elements. This tower has an access in a half pointnarch framed by pillsters and in the upper part two half point arches that form the gallery.It is covered with curved fronton scrollwork topped by pinaculos. In the middle of the arch there is a polychrome romanist relief of Santiago de Compostela.In its last floor two spans open in archs of half point , forming a lodge.

As far as the interior is concerned,it is regulated by the staircase, crowned by a small light that gives luminosity, to the magnificent and spacious staircase. Its railing with well-turned balusters, stone steps in its first sections and covered with ceramics in the rest, enhances it.

Next to this mansion is the one of the Solana Marquis, basically built in the XVI century and then enlarged into two wings. One of these, forming a small angle with the other and the central body that is in a line. Two façades are created in this way , an older and main one onto Santiago Street and the other that is situated in Mayor street.

It seems that this castle had pretensions of being a Torreon, given its height. It is a big palace raised in a regular solar plant, it has three floors and a three-tiered roof. Its construction is solid that is the reason why it maintains great part of the primitive building.

As nearly all the palace residences of the time,the ground floor openings are restricted to the access. In this case it has two access,the main one is Renaissance. On the first floor you find two balconies that verify the good work of blacksmithing and carpentry performed. Over them there are two small bays with ledges raised and tiled the same as in the ones of the ground floor.

On the access there is a coat of arms , moved there in the XVIII century.It is polychromed and quartered. It contains a cross crossed by a sword with the following legend on the border “ this sword will break but my faith will not fail”.

On the third floor of one of the wings, a four way solana is opened by a simple railing as protection

The inside of the house has a lot of details of a great quality. In the entrance,we still find the orignal and magnificent staircase. The pavement of the vestibule remains perfect due to the good conservation and to the geometric forms that it has. It also conserves two coats of arms, one contemporary with the old building, shows two wolves The other that can belong to the beginning of the XVII century is cut and half spit of Blades of San Andrés, chains of navarra and two wolves.

The Town Hall is located in the square on a plot with ramp and stairs. It has three floors in sillarejo. In its last plant and in the facade oriented towards the place it shines a shield of Castile and Leon. On the first floor, there is the drugstore.

And of the most classic elements within the urban nucleus, we jump to the most modern and minimalist design. An important contrast between extremes that denotes the facility with which Villabuena adapts to the changes.

The square of the Tree of Gernika is an example of this. It is one of the fundamental elements of the municipality and that of its people. It is the neuralgic center of the locality, where much of the social life of the neighbors develops. It has been transformed in the last few years renewing the image of the villa.

Its situation is excellent, around it we find the House of Culture, the Pharmacy, the Town Hall, the Church, the House of the Diezmos and the Hotel Viura, providing tourists and admirers of the most avant-garde architecture.

It is of a rectangular shape, has a large playing and resting area that communicates with the Jai- Alai and the municipal swimming pools through the bridge,where you can enjoy a nice walk to the area of ​​the wineries, located in the south of the village. Another exit joins the rest of the village with stairs and a ramp.

The town continues to surprise neighbours and tourists, since at the end of 2009, a neighbour of Villabuena de Álava, discovered the Dolmen of “El Montecillo”. Immediately, the members of the Prehistory Area of ​​the University of the Basque Country, Javier Fernández Eraso and José Antonio Mujika Alustiza, began the review and study of this finding.

The Montecillo corridor grave is located between two vineyards. It has characteristics similar to the other seven that exist in the Rioja Alavesa. It is deformed and semi covered by a recently formed morpuer. The entrance to the corridor is hidden by a wall separating both farms. Its situation has favored the good conservation in which it is maintained.

It consists of a chamber formed by five orthostats and a corridor of which only two are conserved. The polygonal shaped chamber has dimensions of 2’10 meters in width from north to south and by 2.35 meters from east to west.

The dolménico set rests on sandstones common throughout the Rioja Alavesa.

In the interior of the chamber a crater was made for the purpose, probably, of a capacity of the funeral chamber.

This website uses cookies to improve your experience. We will assume that you agree with them, although, if you wish, you can reject them.

Marketing cookies are used to track visitors across the web. The intention is to show ads that are relevant and attractive to the individual user and therefore more valuable to publishers and third-party advertisers.

Preference cookies allow a website to remember information that changes the way the website behaves or looks, such as your preferred language or the region in which you are.